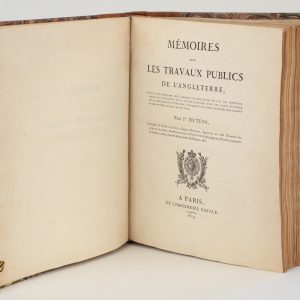 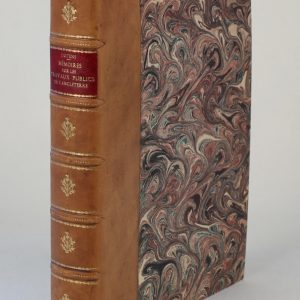 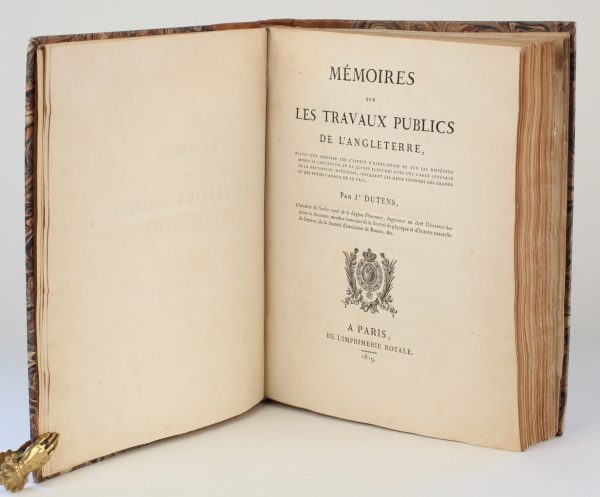 4to, 4 leaves (the first a blank), pp. xx, 374, (1) errata, 15 lithographed plates on 14 sheets (plates 1 and 2 are on the same sheet), 1 large folding engraved map of the canals of England heightened in colour. Twentieth century French quarter calf and marbled sides, spine with raised bands and gilt centres, red morocco label. Tear in first plate and in fold of second plate neatly repaired without loss, paper a little browned but otherwise a clean copy.

FIRST EDITION. A very detailed and well illustrated survey of civil engineering in Britain at the close of the Napoleonic wars, and a more comprehensive source than any English work of the time. Dutens, a canal engineer, was sent to England to study the inland navigation there, though he extended his brief to cover roads, bridges, docks and harbours, and water supply. But above all he was concerned with the economic aspects of such works and whether they were built by individuals or private companies. The British system of private enterprise contrasted sharply with the centralised bureaucracy in France. Among the devices described by Dutens is the diving bell, a device virtually unknown in France, which was then being used for the construction of docks and wharves at London and Plymouth. The book was written at the request of Gaspard de Prony, inspector-general of the Ponts et Chaussées. The illustrations are an early example of the use of lithography for technical illustration. Phillips, Diving, pp. 733–734.