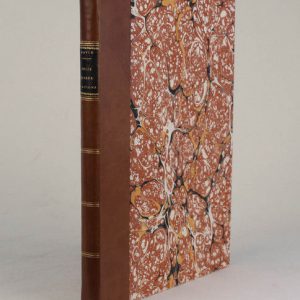 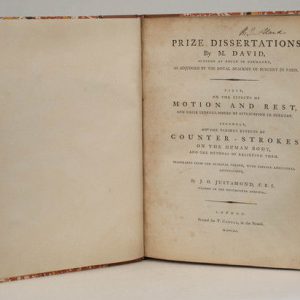 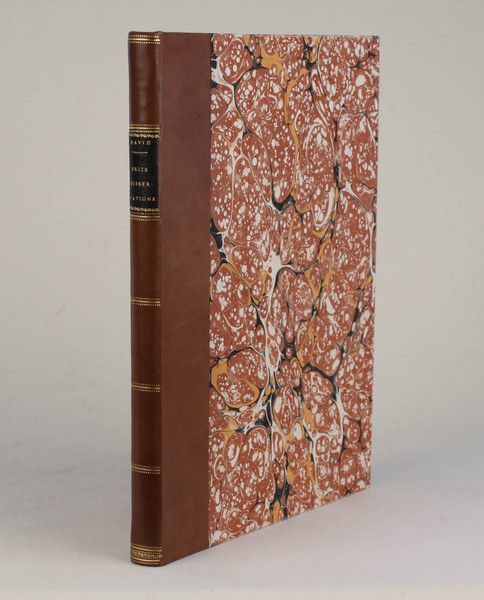 Prize dissertations by M. David, surgeon at Rouen in Normandy, as adjudged by the Royal Academy of Surgery in Paris. First, on the effects of motion and rest, and their several modes of application in surgery. Secondly, on the various effects of counter-strokes on the human body, and the methods of relieving them. Translated from the original French, with copious additional annotations, by J.O. Justamond…

4to, 1 leaf, pp. 165, (1). Some spotting, title a bit dust-soiled and light soiling in the upper margins. Good modern quarter calf antique. Signature of R.J. Allard in upper corner of title.

FIRST SEPARATE EDITION IN ENGLISH of a classic and very rare work in orthopaedics, important for showing the effect of movement and of rest in the treatment of joint conditions. David concluded “that to bring about anchylosis — to effect the union of bones — rest was beneficial, action was injurious. On the other hand, if anchylosis were to be avoided, as in injuries to the elbow or knee joints, then the opposite practice must be pursued — that of action or movement” (Keith). Even after the work of Hilton in the nineteenth century, modern surgeons came to accept the work of David. David also described the various types of spinal deformity consequent to vertebral disease in the same year that Pott published his account. In fact David’s book includes a description of Pott’s disease, with post-mortem findings, better than Pott’s own. David’s essay on motion and rest first appeared in English the year before, included by Justamond in his Surgical Tracts. This separate edition is extremely rare (ESTC records 7 copies word-wide). See G&M 4303 (first edition of 1779). Bick, Source Book, p. 80. Keith, Menders of the Maimed, pp. 34 and 189–191: “…his famous essay.” Valentin, Geschichte der Orthopädie, p. 64.