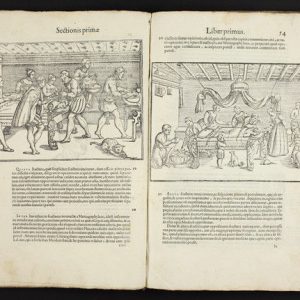 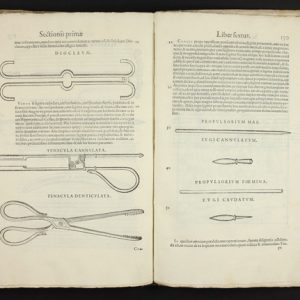 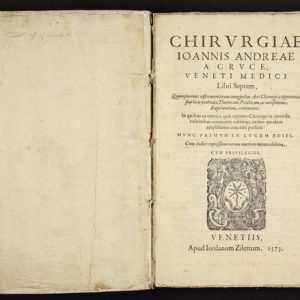 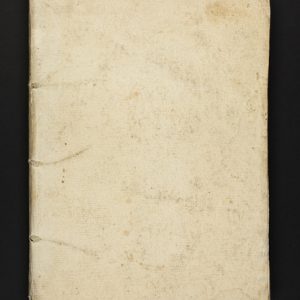 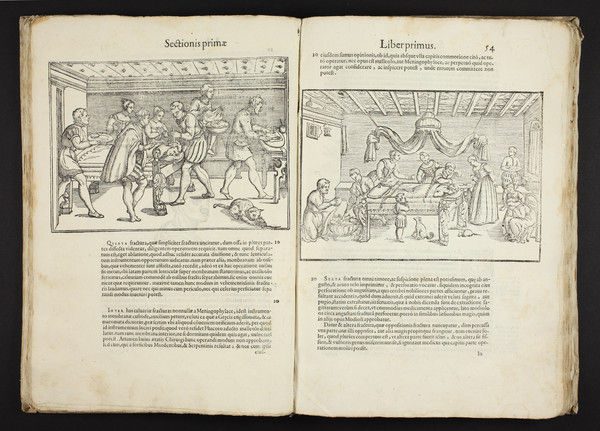 Small folio, ff. (iv), 142, (8) including the final blank leaf. With 5 large woodcuts of surgical operations and numerous smaller woodcuts mostly of instruments, woodcut device on the title. Small repair to fore-edge margin of S3–S5, Z3–Z4 lightly browned and with minor repairs in the fore-edge margins, a few other leaves very lightly browned and some minor dampstains. Early (original?) paste paper boards, no free endpapers, uncut edges. ASSOCIATION COPY, inscribed at the foot of the title-page by Francesco de Bustis (“Ad usum mei Francisci de Bustis a Vidua”), a surgeon who assisted the author and is mentioned by him in this work.

FIRST EDITION. G&M 4850.4. One of the most important iconographic sources for early surgical instruments, and one of the great illustrated medical books of the sixteenth century, with about five hundred woodcuts depicting all the best known and most frequently used surgical instruments from antiquity to the time of publication, the most complete collection of surgical instruments published to date. Three half-page illustrations show surgery of the head in progress; these are the first illustrations to show the stages of such an operation, and a typical room in which it was carried out (at home in a canopied bed with the family, servants, cats, dogs and mice all in attendance), which are the first illustrations of an operating room. Croce improved the trephine and gave important descriptions of cranial and cerebral disease. He also gave excellent recommendations for wound management, and commented extensively on gunshot wounds. Two full-page woodcuts show operations on the battlefield. Croce was one of the most successful surgeons in Venice during the years of warfare with the Turks, who are depicted in the last full-page woodcut. This is a very large, uncut copy, in which the woodcuts are preserved entire. In most copies the edges have been cut and the woodcuts, which extend several centimetres beyond the text, are shaved or cropped. This is a true association copy. Francesco de Busti, called della Vidua, was an assistant surgeon or dissector to Della Croce, and is mentioned in this work (on p. 31 of the 1583 Italian edition) as one of the “most truthful witnesses” to the many dissections and operations on the cranium that Della Croce carried out “with his own hands.” For more on de Busti, see E.A. Cicogna, Delle Iscrizioni Veneziane, vol. 1, p. 337: “Un Francesco de Bustis a Vidua è registrato fra gl’incisori anatomici e fra i priori del Veneto Collegio Chirurgico dal dottor Francesco Bernardi all’anno 1584 e 1602. Questo de Bustis è pure nominato dal celebre Giannandrea Dalla Croce nella sua Chirurgia (Libro II [i.e. I], Trattato I) siccome uno di quei professori che alle sue operazioni anatomiche intervenivano.” There are ten short annotations by de Busti in the margins of this copy and one longer one. Walker, History of neurological surgery, pp. 18–19 and 225–227, reproducing several woodcuts. This first edition is rare, especially in an uncut state.