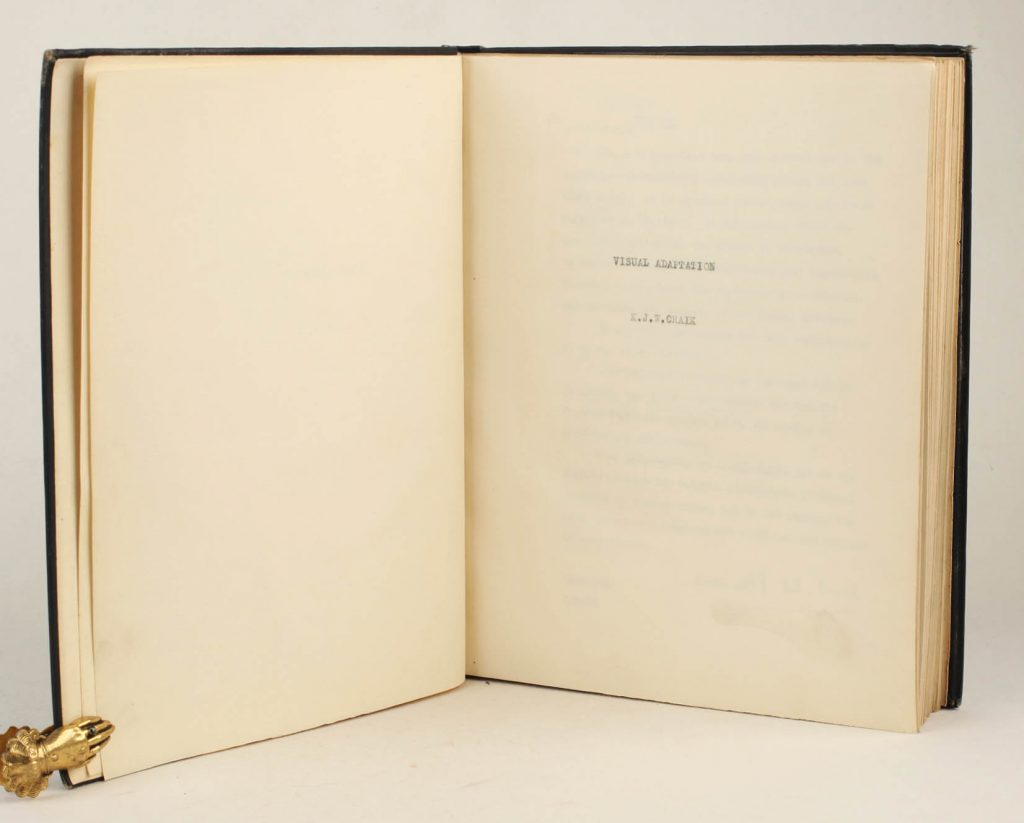 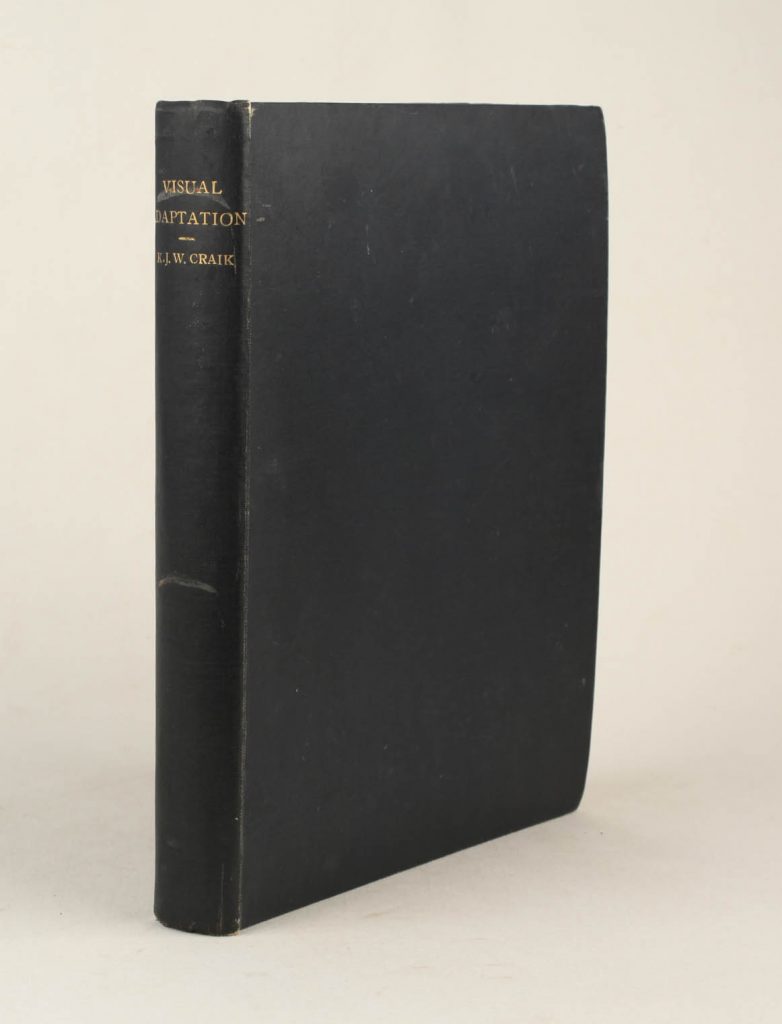 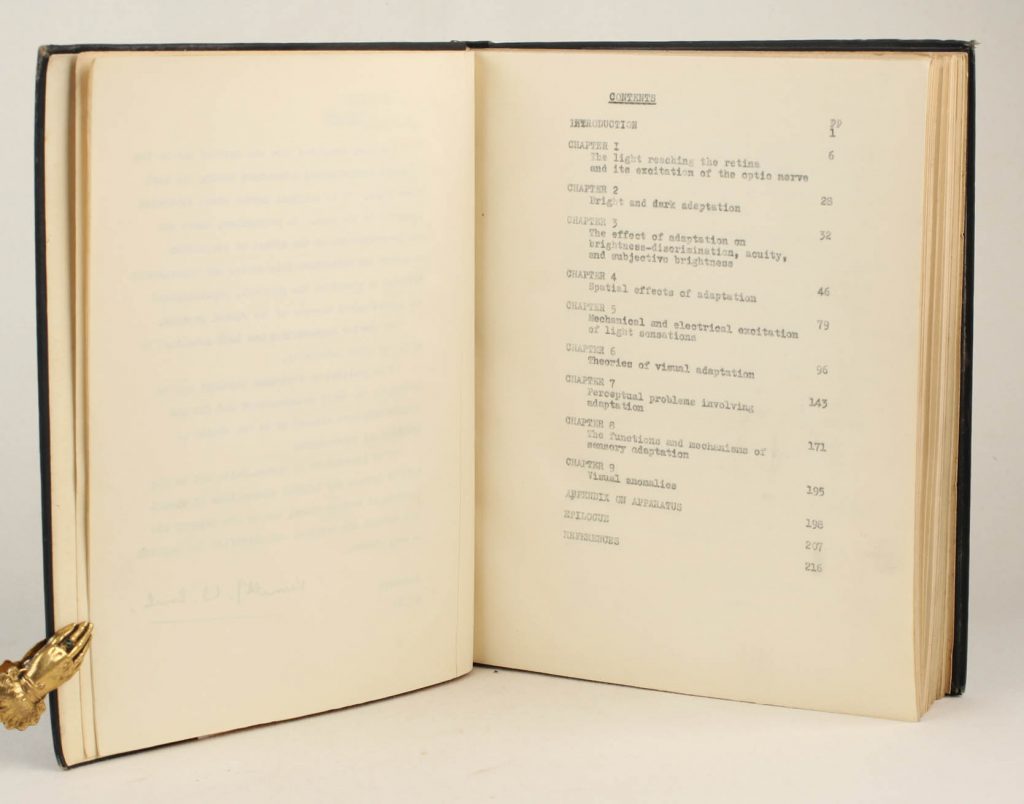 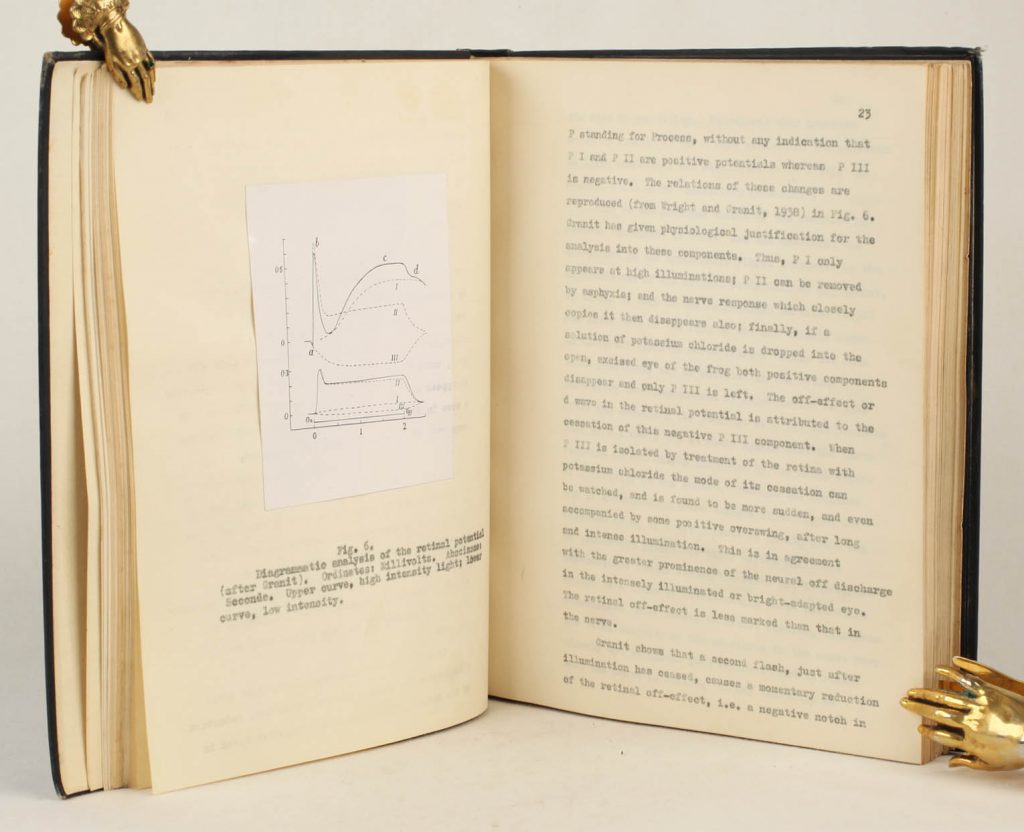 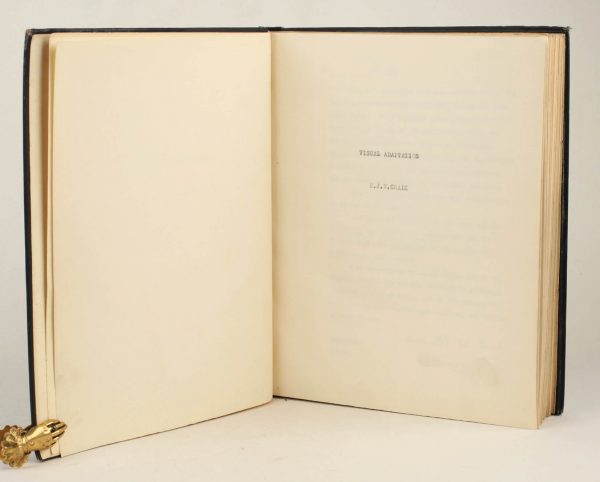 4to, (iv, including one blank) + 213 leaves of carbon copy double-spaced typescript on the rectos only + 18 unfoliated leaves with 23 (mostly photographic) mounted illustrations. Black cloth (slightly rubbed on extremities), lettered in gilt on spine, the title faintly chalked on the front cover. Signed by Craik at the foot of the preface, which is dated 4/2/41. Loosely inserted is an offprint of Craik’s paper “Origin of Visual Images” from Nature, vol. 145, p. 512, March 30, 1940.

Craik’s unpublished doctoral thesis on adaptation from a psychological point of view and its biological significance, originally submitted to Cambridge University in May 1940. This is a revised and considerably enlarged version, with the following notable differences: a different preface, 4 pages of text and 3 figures have been added to the appendix on apparatus (pp. 188–191, figures 20a–20c), and numerous typing errors have been corrected. One of the founders of the field now known as cognitive science, Craik’s thesis is marked by a lively recognition of the interrelation of physical, physiological and psychological problems and situations. He spent the war years studying psychological problems about the role of the human operator in the manipulation of certain instruments of war, and designing those instruments accordingly. In 1943 he published his only book, The Nature of Explanation, in which he drew parallels between the operations performed by minds and machines and suggested that perception and performance are based on mental models of the environment. At this point calculating machines came to the fore as centrally important models for psychological processes and Craik proceeded, speculatively, to explore their possible bearing on perception. In 1948 his two-part paper “Theory of Human Operators in Control Systems”, published posthumously in the British Journal of Psychology, introduced the concept of intermittent control in the context of human control systems, important ideas which are all present or foreshadowed in the present thesis. Later that year Norbert Wiener named this new communication and control theory ‘cybernetics’. As with his wartime contemporary at Cambridge Alan Turing, Craik’s work remained largely inaccessible, much of it being officially restricted. His designs included aircraft cockpits for diminishing mental and physical fatigue, windscreens with superior visibility, and instrument lighting. He died in 1945, aged 31, after being involved in an accident on his bicycle. Extremely rare, being unpublished. See Bartlett, F.C., ”Kenneth J.W. Craik, 1914–1945 [obituary]” in The Eagle, March 1946, 454–465. ODNB.