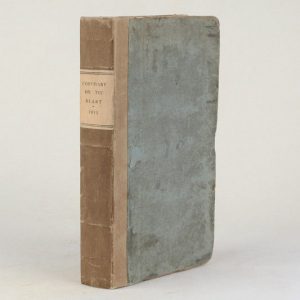 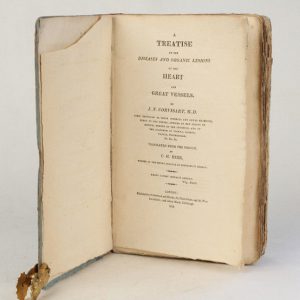 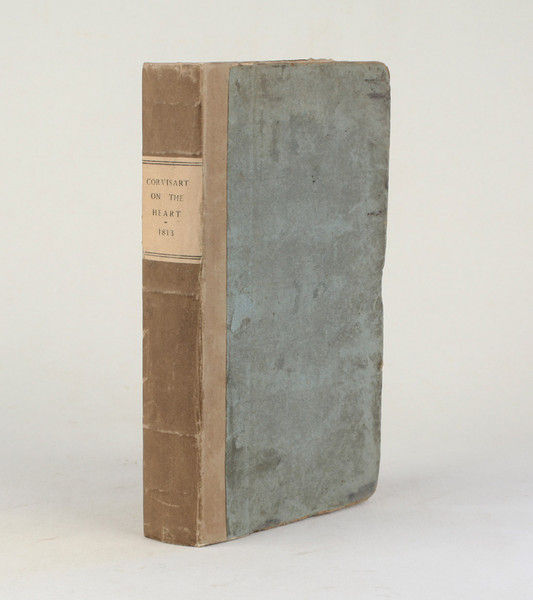 A Treatise on the Diseases and Organic Lesions of the Heart and Great Vessels. Translated from the French, by C.H. Hebb…

FIRST ENGLISH EDITION (the first edition in English was published in Philadelphia the previous year) of Corvisart’s classic work, the first “comprehensive and systematic treatise on diseases of the heart” (the preface) in the English language. “Corvisart founded clinical cardiology and introduced percussion into the clinic after translating Auenbrugger’s book. He classed cardiac enlargement as active or passive aneurysm of the heart, and recognised the purring tremor as a sign of valvular obstruction but did not listen to the heart. His Essai was the first treatise on heart disease to conform to the pattern of a text-book and deal systematically with pericarditis, myocardial disease, carditis and aneurysm. He was physician to Napoleon and a reputed bon viveur… The first edition of Corvisart was written by Horeau from lecture notes, but later editions were by Corvisart himself” (Evan Bedford Catalogue). See G&M 2737 (first edition, in French, of 1806): “Corvisart really created cardiac symptomatology and made possible the differentiation between cardiac and pulmonary disorders.” Bedford catalogue 364: “Hebb’s translation of the second French edition, now very rare.” This edition is much rarer than the French original or the American edition. See also Willius & Keys, Cardiac Classics, pp. 279–290, and Lilly, Notable Medical Books, 159.