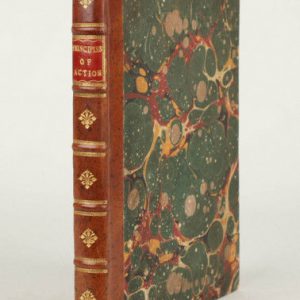 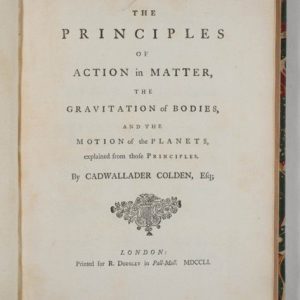 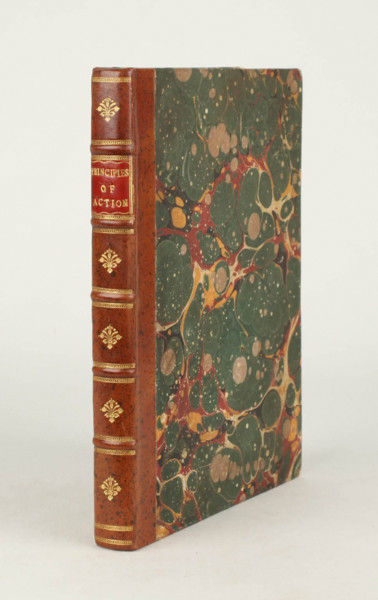 The Principles of Action in Matter, the Gravitation of Bodies, and the Motion of Planets, explained from those principles.

4to, pp. (xii), 215, 2 folding engraved plates. Modern half calf antique, fine copy. Inscribed at the top of the title “Hasely Court”, the home of James Muirhead and his wife Katherine, who was the daughter of James Watt Jr.’s business partner Matthew Robinson Boulton of Tew Park in Oxfordshire, and granddaughter of the great Matthew Boulton of Soho.

FIRST COMPLETE EDITION. One of the first, if not the first, American books based on Newton’s works. It was the most ambitious scientific work attempted in the American colonies to date, and Colden’s major scientific effort. Conscious that Newton had admitted his inability to understand the cause of gravity, Colden furnishes his own explanation based on Newton’s theories. “Colden never realised that his work was in direct conflict with the laws of motion of the Principia, which he did not fully comprehend. He therefore resented being called an opponent of Newton and sought to apply his method to explanations of heat, fermentation, putrefaction, colors, and fertilization” (DSB). The first edition, consisting of the first two chapters only, was published in New York in 1745, and is a very great rarity — Babson recounts how Thomas Jefferson sought a copy with great difficulty, and perhaps in vain, as early as 1786. The London edition of 1746 was unauthorised and had the same content. In this, the third and last edition, the first two chapters are revised and the following chapters and the plates are published for the first time. Colden was born in Scotland but became a prominent American physician, historian and colonial official. Not in Babson, Gray or Wallis (Babson 47 has the London edition of 1746).