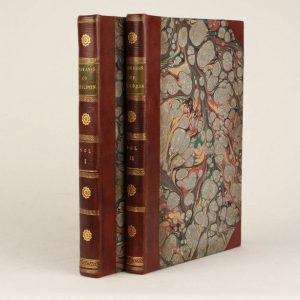 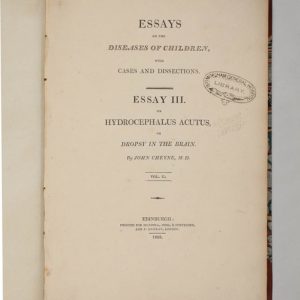 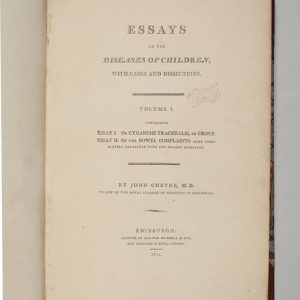 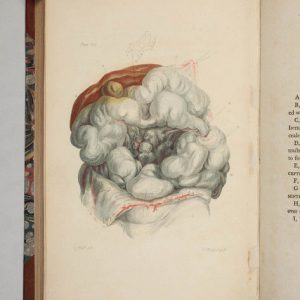 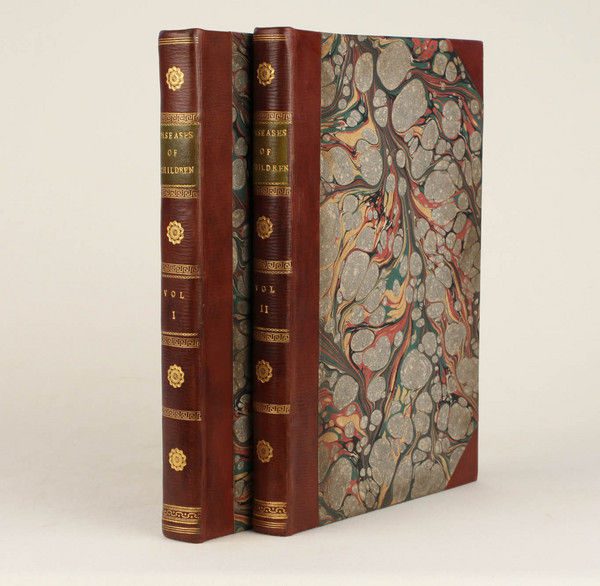 Essays on the Diseases of Children, with cases and dissections. Volume I. Containing Essay I. Of cynanche trachealis, or croup. Essay II. Of the bowel complaints more immediately connected with the biliary secretion. (–Vol. II. [Containing] Essay III. On hydrocephalus acutus or dropsy in the brain.) Edinburgh: Printed by and for Mundell & Son, and Longman & Rees, London. 1801 (vol. II: Printed for Mundell, Doig & Stevenson, and J. Murray, London. 1808).

FIRST EDITIONS, and as such of exceptional rarity, as it is generally thought that volume 2 as such was never published, and that the third essay appeared separately in 1808 under its own title of An Essay on Hydrocephalus Acutus (see for instance, the Wellcome catalogue II, p. 339). However, here is evidence that the second volume was actually published; a copy in this state is in the National Library of Medicine, and a copy (without volume 1) was offered by Dawsons of Pall Mall in their Catalogue 229 (1972). There appear to be four other copies located by COPAC. Cheyne developed a particular interest in the diseases of children and in acute and epidemic diseases, and his essay on hydrocephalus was the first description of the condition. “Cheyne’s Essay, one of the first noteworthy monographs on neuropathology to appear in the nineteenth century, contains the first description of acute hydrocephalus or basilar (tuberculous) meningitis, a disease that primarily affects children. The work was a continuation of Robert Whytt’s Observations on the dropsy in the brain (1768), in which Whytt gave the classic account of tuberculous meningitis” (Norman). Cheyne moved to Dublin in 1809, and published a second essay on the subject there in 1815. The hand-coloured engraved and stipple-engraved plates in the first volume are of exquisite quality, six of them being from drawings by Charles Bell. G&M 4635, the essay on hydrocephalus acutus; see also Norman catalogue 472; McHenry, History of neurology, pp. 248–249; and Abt, Pediatrics, pp. 84–85.