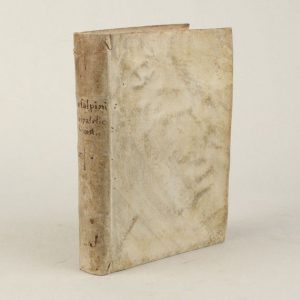 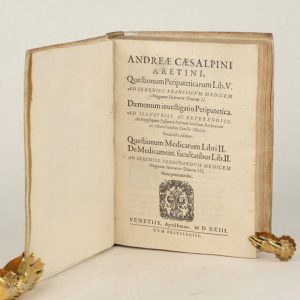 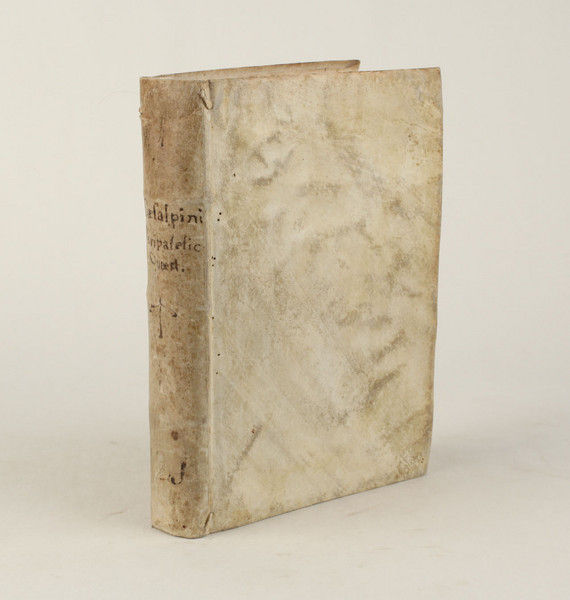 Second, enlarged and more important, edition of this famous book on which the claims for Andrea Cesalpino as the discoverer of the circulation of the blood have been based. The Peripateticarum Quaestionum was his first published book; in it he was a follower of Aristotle rather than Galen, although he partially reformulated the former’s theories. “Cesalpino’s most important medical studies concern the anatomy and physiology of the movement of the blood. He gave a good description of the cardiac valves and of the pulmonary vessels connected to the heart, as well as of the minor blood circulation; he also recognized that the heart is the center of the circulation of the blood and accepted the existence of the traditional synanastomoses of the arteries with the veins. He did not, however, discover the major circulation (first demonstrated in 1628 by William Harvey)” (DSB). “No-one who reads Cesalpino impartially can deny the eminent part that he played in the discovery of the circulation of the blood” (Castiglioni, p. 438). Cesalpino was the first to use here the expression circulatio sanguinis (circulation of the blood) in a scientific sense. This edition contains the Quaestionum Medicarum and the De Medicamentorum Facultatibus for the first time. The former is important for recording the results of tying a vein and the first published statement concerning the centripetal flow in veins (on f. 234). G&M 756 (this edition), and see 755 for the first edition of 1571. Both editions are extremely rare. Norman catalogue 431.