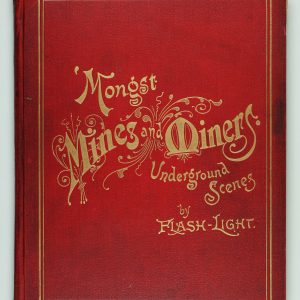 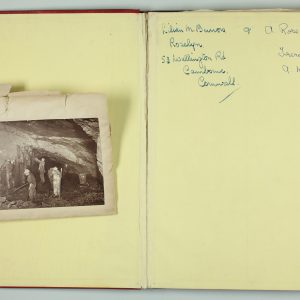 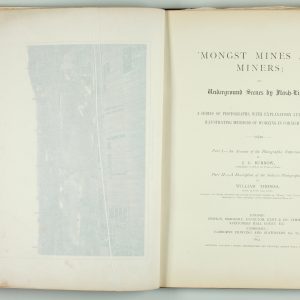 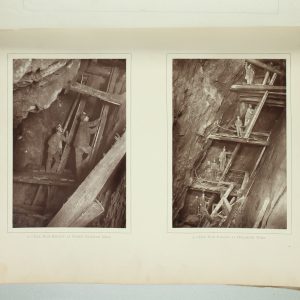 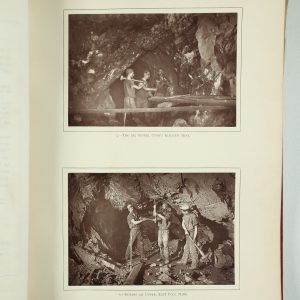 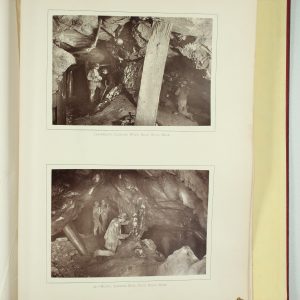 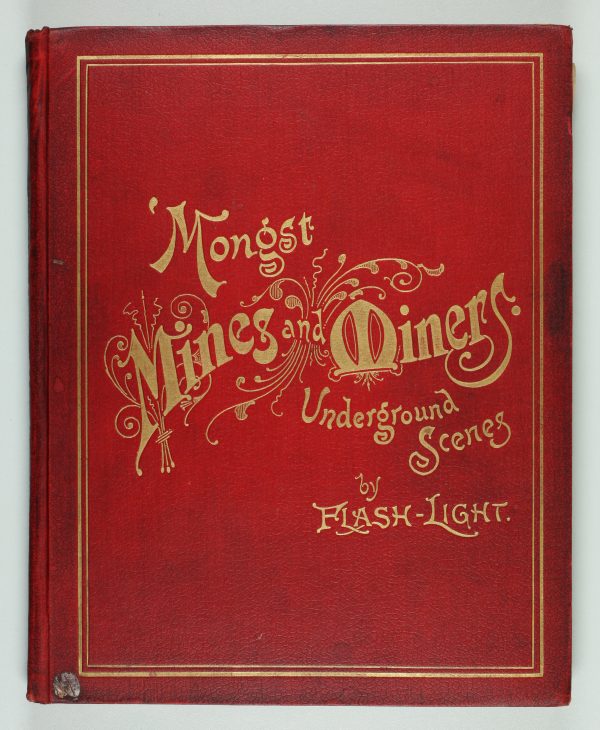 ’Mongst Mines and Miners; or underground scenes by flash-light: a series of photographs, with explanatory letterpress, illustrating methods of working in Cornish mines. Part I.—An account of the photographic experiences, by J.C. Burrow… Part II.—A description of the subjects photographed, by William Thomas…

Large 4to, 32 pages, folding lithographed section, photographic frontispiece and 13 photographic plates with a total of 27 images (all actual mounted photographs) with tissue guards. Half-title, text within ruled borders. Original red cloth (a little soiled, upper inner hinge loose), ruled and lettered in gilt on the upper cover, gilt edges. Inscribed on the front free endpaper by Lilian M. Burrow (probably Burrow’s sister) of Camborne and by A. Rose Curtis, née Burrow (Burrow’s daughter), also of Camborne. Provenance: the photographer’s copy, by descent through the family. Purchased at the sale of Burrow’s archive in Truro on 26th August 2021, lot 537.

FIRST EDITION, THE PHOTOGRAPHER’S COPY. This remarkable book was produced as the result of the photographer, John Burrow, receiving a commission from the owners of four of Cornwall’s deepest mines to capture life underground. In order to do this Burrow, a pioneer of flash photography, had to illuminate the mines with artificial light, and he thus became a pioneer in underground photography as well. He had to overcome the considerable difficulties of wet conditions and illuminating the workings by artificial means. Light was provided by magnesium flash powder which could be easily ignited with a miner’s candle. He used multiple exposures and multiple flashes to photograph the larger spaces. The flash powder provided a very even light, and Burrow could vary the intensity by altering the quantity of the powder, although a large charge left the air full of smoke and unsuitable for further exposures. The 26 images, all but one of which were taken underground, are remarkably clear and sharp. Even the frontispiece, a view on the surface, had to be taken on a Sunday when there was no smoke. With this copy of the book are a number of additional copies of the images, with Burrow’s stamp on the back, one of which is a portrait picture not in the book. Burrow (1852–1914) was born in Truro and in the early 1890s was living in Camborne. His photographs were originally shown at the annual exhibition of the Photographic Society of Great Britain, of which he was a Fellow, where he received a medal for his work. He was photographer to HRH, The Prince of Wales.