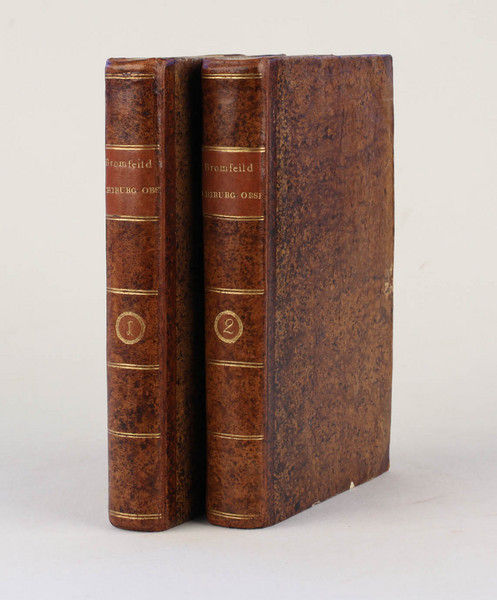 FIRST EDITION. “His Chirurgical observations and cases...contain a number of valuable improvements in surgical methods, particularly as to bilateral lithotomy and the compression of the subclavian artery above the clavicle on the first rib. He also clearly points out the proper manner of ligating the artery in amputations, using the tenaculum to draw out the vessel, so that the nerve and other tissues should not be included, but he used a flat ligature. That he was a cool operator is shown in a case of lithotomy which he reports in the second volume at page 266, in which the intestines protruded into the bladder, and in which he first extracted three stones and then returned the intestines, with result of a perfect cure” (Billings, The history and literature of surgery, p. 72). Bromfield was the founder and first surgeon of the Lock Hospital, and a surgeon to St. George’s Hospital. Most of the second volume is concerned with the diseases of bones, fractures, and rickets, and with lithotomy, Bromfield here giving “the first authentic interpretation of Celsus regarding what was later called bilateral lithotomy” (Orr Catalogue 88). Bromfield was also the first to employ an hermetic seal by stretching the skin, during an operation on the knee-joint described in this book (Valentin, Geschichte der Orthopädie, 104).