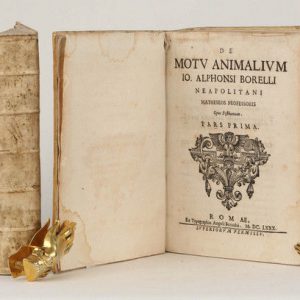 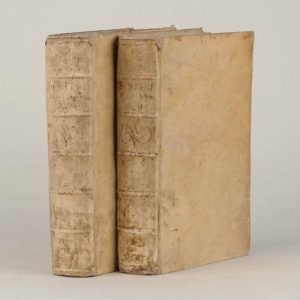 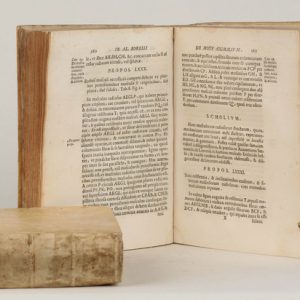 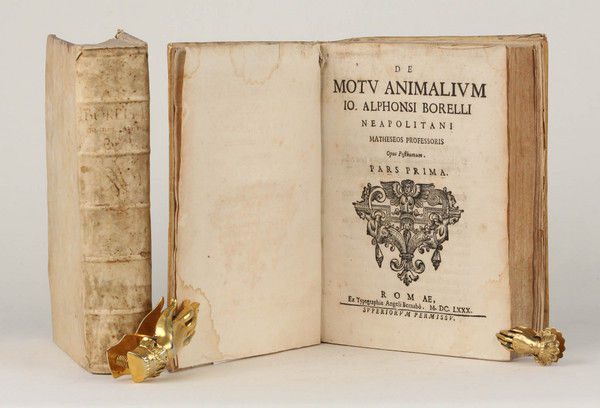 2 volumes, 4to, pp. (xii), 376, (11), and 18 stilted and folding engraved plates; pp. (iv), 520. Woodcut device on titles. Dampstain (mostly quite faint) in lower corner of volume 1 and upper inner corner of volume 2, a few other small dampstains, some light browning of a few gatherings (as usual with this book). Contemporary vellum, spine lettered in manuscript (but lettering rubbed and spines a bit marked), generally an excellent set.

FIRST EDITION. The foundation of the study of biomechanics. “Inspired by Harvey’s mathematical demonstration of the circulation of the blood, Borelli, a trained mathematician and physicist, conceived of the body as a machine whose phenomena could be explained entirely by the laws of physics. Borelli was the first to recognise that bones were levers powered by the action of muscle, and devoted the first volume of his work to the external motions produced by this interaction, with extensive calculations on the motor forces of muscles. The second volume treats of internal motions, such as the movements of muscles themselves, circulation, respiration, secretion, and nervous activity. Borelli was the first to explain heartbeat as a simple muscular contraction, and to ascribe its action to nervous stimulation; he was also the first to describe circulation as a simple hydraulic system” (Norman). Borelli (1608–1779) was primarily a mathematician, one of the most distinguished pupils of Galileo, and the principal animus of the Accademia del Cimento. On the movement of animals was his most important work. In it, he analysed the movements of human and animal bodies, the flight of birds, and the swimming of fish in terms of mechanical action, of levers and fulcrums. Moreover, he realised that the action of muscle involved complex chemical processes and neurological stimulation. His study of fish swimming led him to design several types of diving apparatus, described at te end of vol. 2. Horblit, 13. Dibner, Heralds of Science, 190. Parkinson, Breakthroughs, 1680. Lefanu, Notable medical books, pp. 90–91. G&M 762 (cardiology) and 3669.2 (probably the first measurement of masticatory force). Roberts & Trent, Bibliotheca mechanica, pp. 42–43. Fulton, History of physiology, pp. 220–222. Norman catalogue 270.