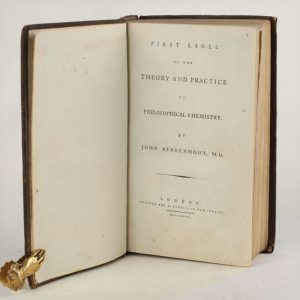 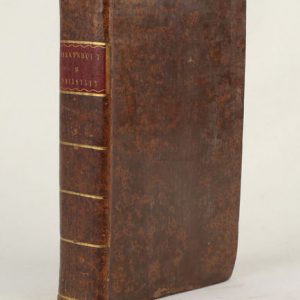 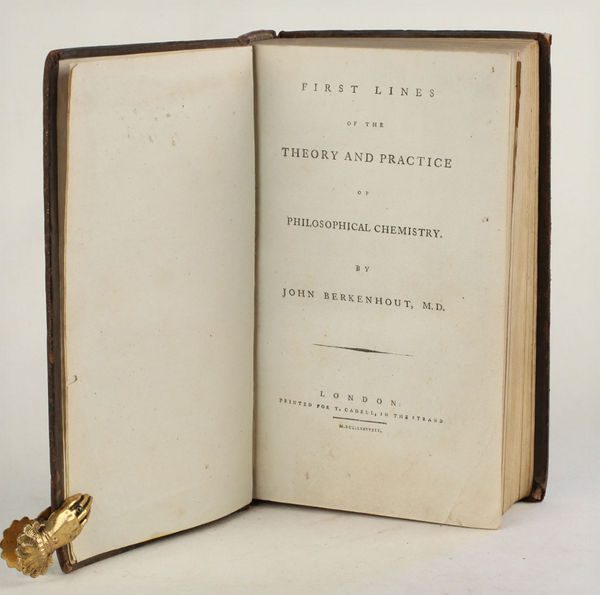 First Lines of the Theory and Practice of Philosophical Chemistry. London: Printed for T. Cadell… 1788. [Bound with:]
[2] PRIESTLEY, Joseph. Heads of Lectures on a course of Experimental Chemistry, delivered at the New College, in Hackney.

1. SOLE EDITION. “Berkenhout (1730–1791), a British physician of Dutch origin who spent some time in America, had a deep knowledge of natural history, botany and chemistry. His extensive textbook of chemistry is not recorded among his writings in the D.N.B. [or in the new ODNB]. It is interesting to note that he is aware of the new discoveries of Priestley and Lavoisier, which had only recently been published. The last part of the book…is a dictionary of chemistry. A very scarce work…” (Neville). Cole 114. Neville I, p. 128. 2. FIRST EDITION. “Priestley prepared this précis of his course of thirty-six lectures on experimental philosophy for the use of his students. The lectures are chiefly on chemistry with the last seven covering heat and animal heat, light, magnetism and electricity. The chemistry topics include matter in general, gases, acids, alkalis, inflammable liquids, earths and metals” (Cole). Cole 1076. Neville II, p. 338–339. Crook S/477.