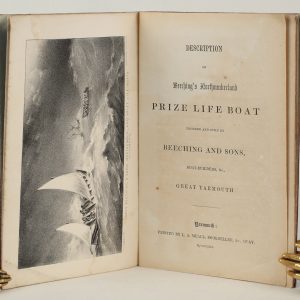 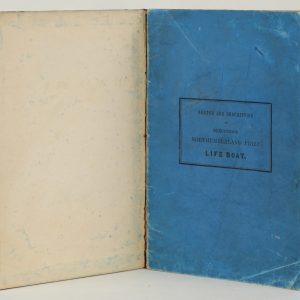 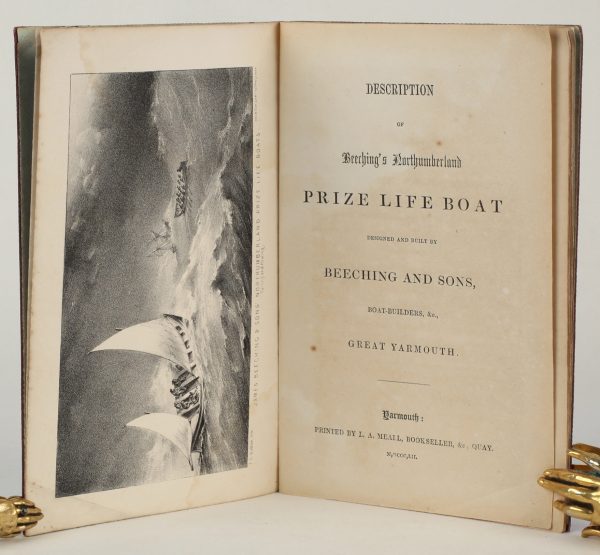 SOLE EDITION. The first self-righting lifeboat to go into production, and the basis for all lifeboats thereafter. “In 1851, Britain’s Royal National Lifeboat Institution advertised a 100-guinea prize for a self-emptying, self-righting boat. The prize was won by James Beeching of Great Yarmouth, whose design became the standard lifeboat in Britain until the introduction of motor lifeboats in 1909” (The inventions that changed the world, 1982). It was called the Northumberland lifeboat because the Duke of Northumberland put up the money for the reward following the loss by drowning of twenty of the best pilots on the Tyne in 1849. There were thirty designs in the competition, which Beeching’s won by 84 points to 78. Very rare, with no copy recorded by COPAC, although the dedication copy could be in the library of the Duke of Northumberland at Alnwick. The frontispiece shows Beeching’s lifeboat and a pilot gig approaching a ship in a storm. This appears to be the only contemporary book on the subject although a technical drawing is included the committee’s report of 1851.