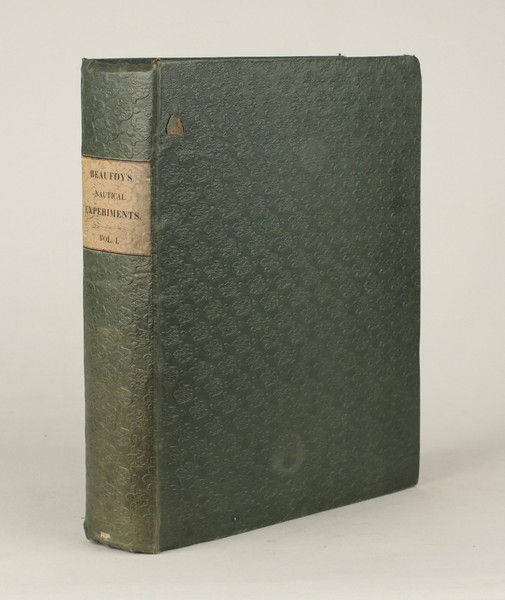 Nautical and Hydraulic Experiments, with numerous scientific miscellanies. Vol. I [all published].

London: Printed at the private press of Henry Beaufoy, F.R.S., May1834

FIRST EDITION. Between 1793 and 1798 Beaufoy undertook pioneer researches on the resistance of bodies in water. “Not only did Beaufoy investigate the individual effects of head form, tail form, length, and surface area, but his measurements were sufficiently precise for him to conclude that, as the velocity increased, ‘friction always increases in a much less ratio [from 1.71 to 1.82] than the duplicate ratio’ ” (Rouse & Ince, History of hydraulics, p. 129). Beaufoy’s experiments produced many useful results in shipbuilding, as well as the first practical verification in England of Euler’s theorem of resistance of fluids. He was a founder of the Society for the Improvement of Naval Architecture (the first such body to exist), and also the first Englishman to climb Mont Blanc. Roberts & Trent, Bibliotheca mechanica, 28.