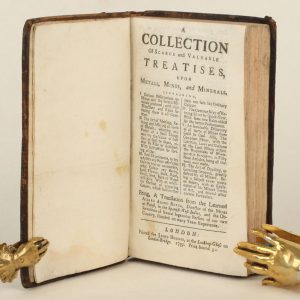 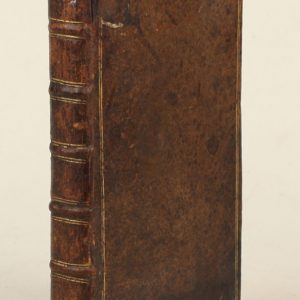 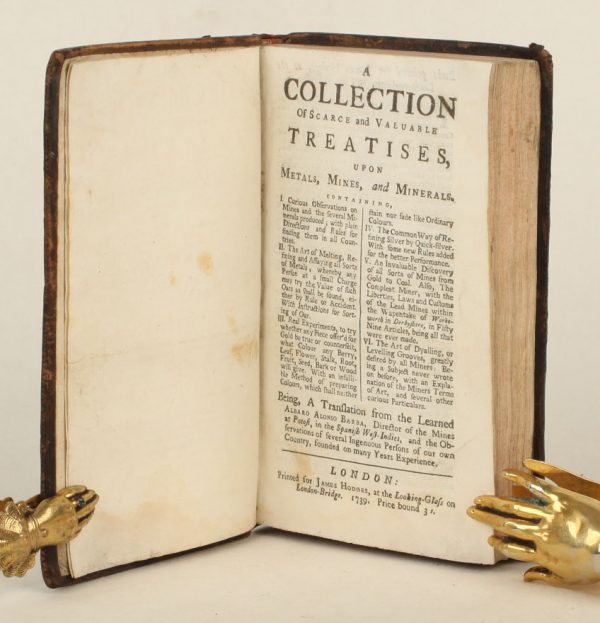 A Collection of Scarce and Valuable Treatises, upon Metals, Mines, and Minerals. Containing, I. Curious observations on mines… VI. The art of dyalling, or levelling grooves… Being a translation from the learned Albaro Alonso Barba…

FIRST EDITION, second issue, of this collection of important treatises on mining and metallurgy, incorporating the third edition in English of Barba’s The Art of Metals, the fifth edition of Gabriel Plattes’ A Discovery of Subterraneall Treasure, and the sixth edition of Thomas Houghton’s Rara Avis in Terris, or the Compleat Miner. They were collected and published together because of the rarity of the original editions and the lack of other good works on the subject. Barba’s book, first published in Spanish in 1640 and in English in 1670, was a celebrated treatise on mining and metallurgy, the first significant work on the subject in Spanish, and the first work on mining in the Americas. Gabriel Plattes’ Discovery of Subterraneall Treasure, first published in 1639, was the first useful text in English dealing with metallurgy, and includes the earliest description in English of the separation of gold and silver by the use of nitric acid. Houghton’s work, first published in 1681, was the first English work on lead mining. It contains the laws and customs of the Derbyshire lead mines and explains the terms used by miners. This second and rarer issue has a cancel title with different wording and imprint; the sheets were perhaps sold to James Hodges who issued it with a new title-page which has his advertisements on the verso although the final advertisement leaf is the original. Ferguson I, p. 170 (the second edition of 1740). Hoover catalogue 225 and Neville I, p. 73 (both first issue).