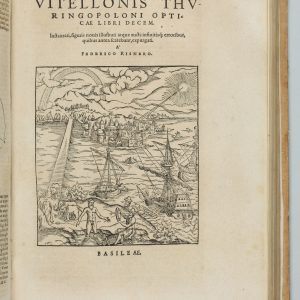 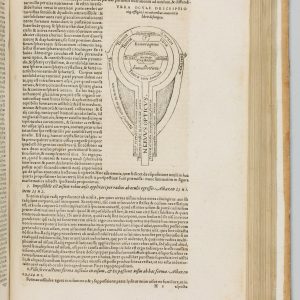 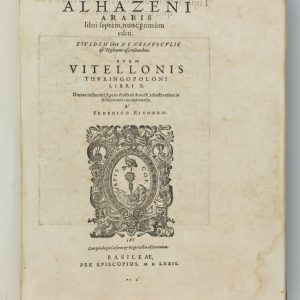 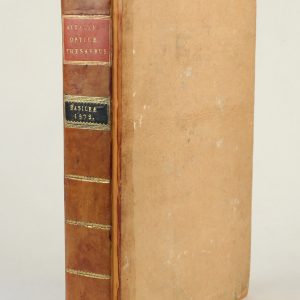 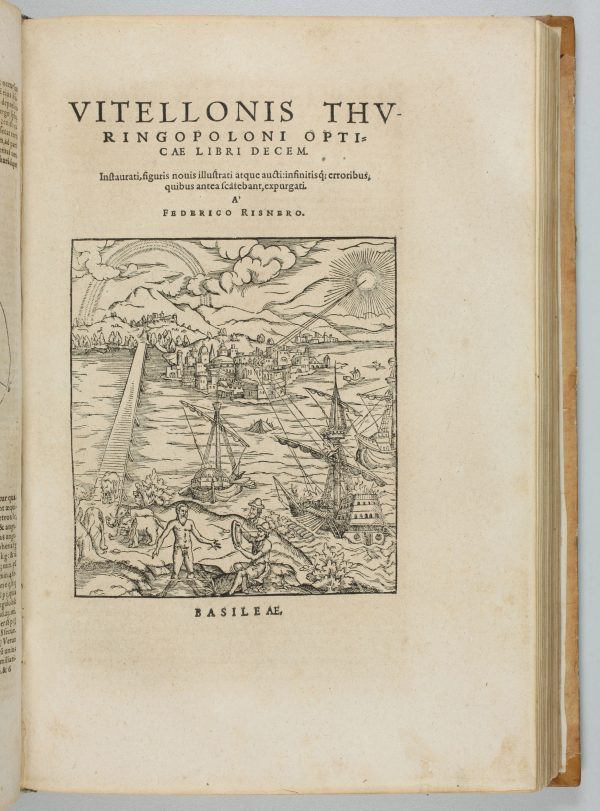 2 parts in 1 volume, folio, 4 leaves (the last blank), 288 pages; 4 leaves, 474 pages, 1 leaf (blank but for printer’s device on verso). Woodcut device on title, woodcut on verso (repeated on the separate title-page to second part by Witelo), 4 woodcuts in the text (including one of the eye and one repeated from the first part) and numerous diagrams. Paper lightly foxed and pale dampstains in outer corners of last 50 leaves, otherwise a fine and clean copy. 18th century calf-backed boards (rebacked with the original spine laid down, corners renewed).

FIRST EDITION of “the most influential optics book ever produced” (DiLaura). It “synthesized, clarified and augmented all previous work on vision, perception, reflection, and refraction of light. It gave a new intromission theory of vision, elaborated a theory of visual perception, described apparatus and procedures for measuring geometric optical properties of reflection and refraction, and presented an elaborate analysis of plane and curved mirrors” (ibid). Written in 1028–1038 by the Egyptian Arabic scholar Ibn al-Haytham (Alhazen), the work was tranlated into Latin no later than 1200 as De Aspectibus. “The ininfluence of Alhacen’s De Aspectibus was profound. Between the time of its appearance and about 1400, virtually every optics text in the Latin West either cited it explicitly or bore its influence, and all were derivative, smaller in scope, and shorter in length. By 1325 it was in use at universities. Optics texts from the advent of printing until the end of the 17th century all show the influence of the De Aspectibus. The greatest opticians of the age read and learned from Risner’s Opticae Thesaurus; Thomas Hariot, Johannes Kepler, Willebrord Snell, and René Descartes all cited the work. 100 years after its publication, Isaac Barrow cited the work in his Lectiones Opticae et Geometricae of 1674. The Opticae Thesaurus swept the field of optics, being considered by contemporaries to treat all of the then-current optics and becoming the foremost advanced optics text of the Renaissance” (ibid). The second part is the “Ten Books of Optics” by the 13th-century Polish scholar Witelo, the earliest treatise on optics written by a European, first published in 1535. It was a redaction and augmentation of Alhazen’s De Aspectibus, and the most-used advanced text on optics in the Middle Ages. DiLaura, Bibliotheca Opticoria, 30 and 31 for a full discussion of these works; also DSB. Dibner 138. Norman catalogue 1027.