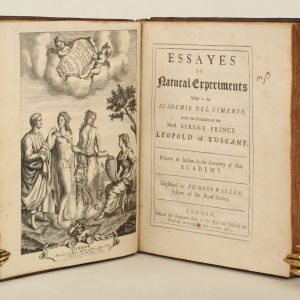 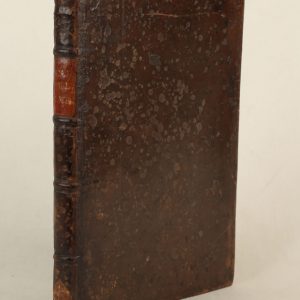 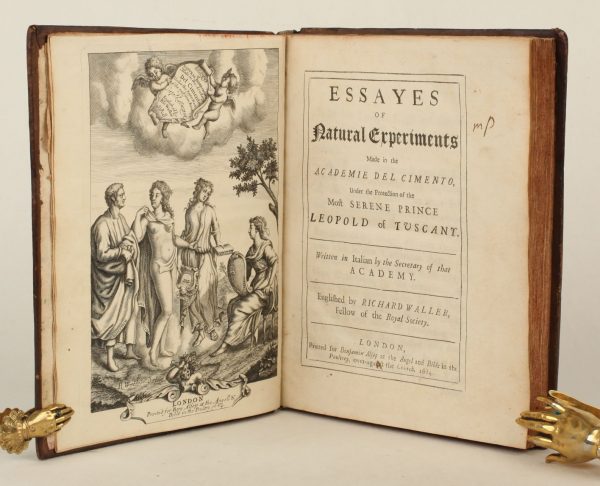 Essayes of Natural Experiments made in the Academie del Cimento, under the protection of the Most Serene Prince Leopold of Tuscany. Written in Italian by the Secretary of that Academy. Englished by Richard Waller…

4to, 12 leaves, pp. 80, 77–160, (10), 1 leaf (blank), engraved title from a drawing by Waller and 19 engraved plates of experiments and apparatus. With the initial imprimatur leaf and final blank, title within double ruled border. Contemporary mottled calf (foot of spine worn, short crack at top of upper joint, one lower corner worn), spine gilt, red morocco label. Some plates and gathering U lightly browned, but a nice copy.

FIRST EDITION IN ENGLISH of the only publication of the Accademia del Cimento, in effect the first report ever published from what we would now call a research laboratory. The Accademia del Cimento [Academy of Experiment] was founded in Florence in 1657, before the formal foundation of either the Royal Society or the Académie des Sciences. Two of its founder members, Viviani and Torricelli, were disciples of Galileo; others included Borelli, Steno, Redi and Cassini. The text was written by Count Lorenzo Magalotti, and includes accounts of experiments on temperature and air pressure (including Torricelli’s invention of the barometer), the velocity of sound and light, phosphorescence, magnetism, amber and other electrical bodies, the freezing of water, etc. Wing A161. Wheeler Gift 196. Duveen p. 636: “…highly important experiments.” Wolf, History of science, I, pp. 55–59. See Dibner 82 and Norman Catalogue 485 for the first edition of 1667. This was the only English edition.